This is where I take one champion idea from the fan creation/player concepts area and bring them to life!
1 hour drawings of a unique champion based off Fan creation conceptual descriptions.


******SUBMISSION DIRECTIONS******
Description: Name,Title,Role(Fighter/Mage/Rogue),Race,Gender, Age,Short-Tall, Thin,hair, Fat
Backstory: Short back story(A paragraph at most)
Costume: Description of armor, clothing, robes, that the champ is wearing
Props: Chain Scythe Sword with flaming skulls, Shield of doom skull
Personality: "Rambunctious,flamboyant, Egotistical, Jerk, Loyal"
Extra: Anything extra you want to say about your champ limit 2-3 sentences.
KIT: At the bottom I would like a link to your previous Champion Kit forum posts so I can see that this is something you have spent a good amount of time working on.

Also post up any artwork you have done or have had done for you by other artists for your champ so I have more to go from. 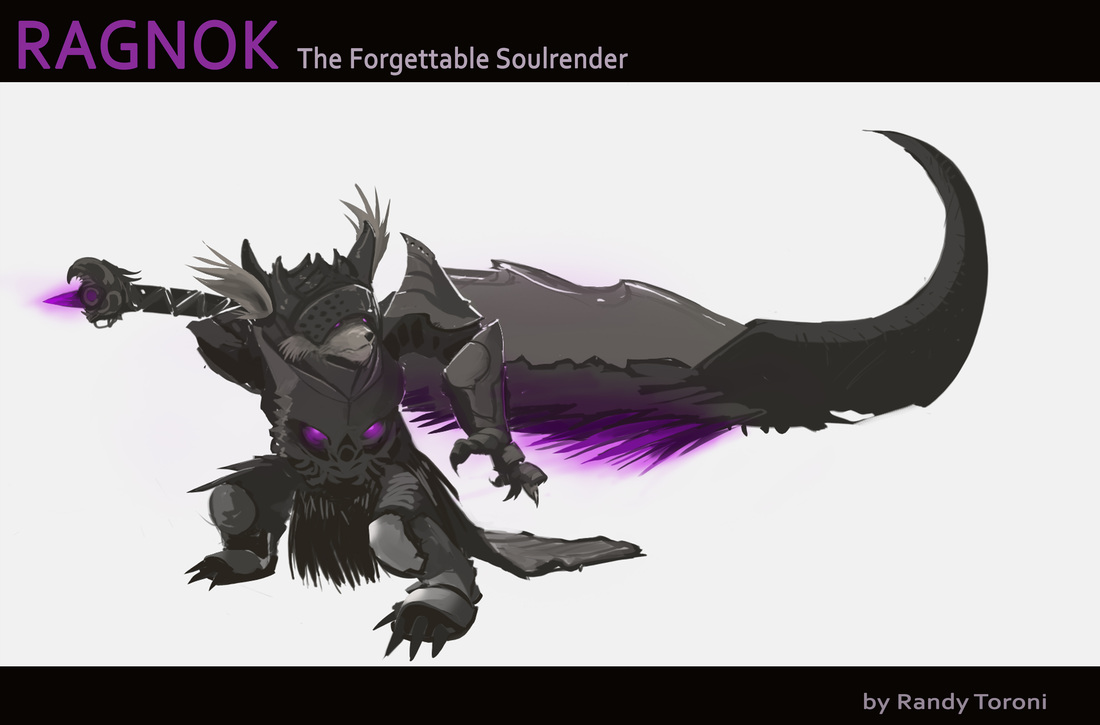 Description:
Title: Ragnok, the forgettable Soulrender
Role: Fighter/Tank(Disabler & Initiator) Specialized in Jungle, can be also played on Top.
Race: Yordle (Origin Yordle, but then became possessed by the Void)
Gender: Male
Age: About the same age as Rumble, maybe 1-2 years earlier.
Size: Also about the same size as Rumble (Rumble seems to be also the biggest Yordle at this time)
Appearance: Black and Dark fur, has no hair actually, because he now is covered by the heresy of the void and has a mask, but is supposed to have white fur on his head. He has muscles, but because of his Dark Armor, it's not really seen.Backstory: A Yordle who trained himself to be a fierce Warrior, despite of his dream, his family and friends abandoned him because they thought he lost his mind and didn't wanted to have any connections to someone like that. Years later after he left Bandle City, he came back to open a Tournament, and won against everyone with his own muscles. Instead of his family and friends turning back, they even more dissociated from him, because they feared of his vendetta. He then ousted his memories of everyone, he only trained because he wanted to protect those he liked, loved and wished to, but then after losing his dearest, he decided to destroy the world as it is, because his heart was hurt like noone could imagine. He went to the void to receive greater power, but came back from the Void without any memories. Instead of destroying, he was granted with the Power from the Void, to wish to protect the world he lives in, against the Void.
Costume: Like a Deathknight(Not WoW), he wears a Dark Armor that also has similiarities to some Knight Armor. Besides of the Knight Armor similiarities, it's black with white decorations and symbols (Not shiny white, more of a pale white). He has a extremely long cape/mantle, that is also black. It's so long, that it even grinds on the ground. His mask has a bit of a Darth Vader plus Hannibal Lecter looking. He has some tight and great plate shoulders. It is most common for beings that are suppressed, corrupted or overtaken by the void, that the beings have no pupils, but Ragnok has pupils, purple pupils and the surroundings of his eyes are veiled in darkness.
Props: A Greatsword that is made by the Void. It has a very sharp sickle to capture enemy targets. It has multiple long and dark purple spikes that is being used to get stuck in the targets body.
Personality: Though he's corrupted by the Void, he's not like "HAIL TO THE VOID" or "DESTROOOOY". He kept parts of his old personality, which are: Brave, Protective Instinct, Forward(Cheeky), Noble(Proud) and parts of his new personality, which are: Destructive(Does not fear to kill), Overwhelming(Sometimes he forces himself to be a strong presence), Brutal(Even though sometimes he does not want it, but he has to unleash his deepest desires) 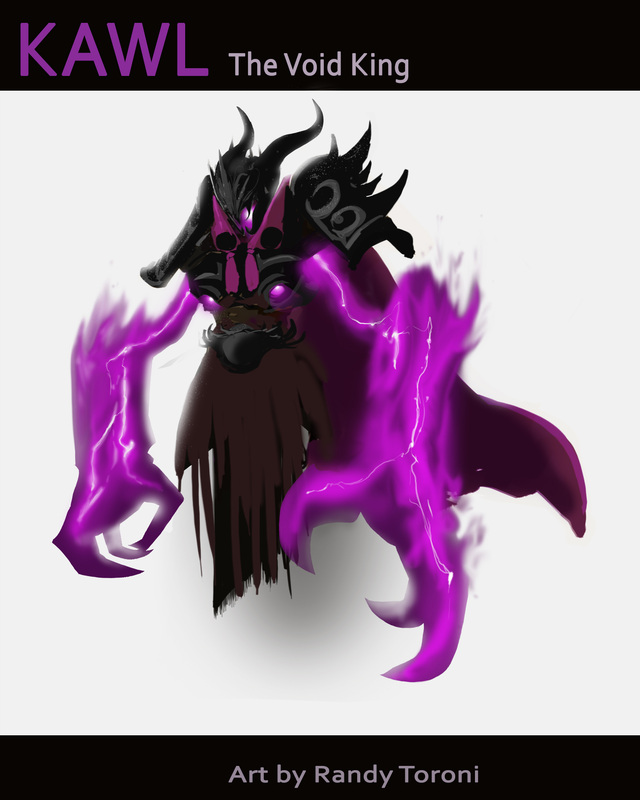 Description: Kawl- The Void King, Role-Tanky AP Mage, Race-Void, Gender-male, he is Very Royal looking, really muscular.
Backstory: in a nut shell, the Void is angry so it materialized itself into a single being that has launched itself into the real world.
Costume: Otherworldy armor, it is very ornate with some jewels since he is a king, but still bulky and strong. also a long cape. his colors are purple and gold
Props: none, he fights by summoning Creepy hands to punch and grab.
Personality: Creepy, proud, mysterious, not much to say.
Extra: He has no legs, he just floats around, and his arms fade to a dark purple.
KIT: http://forums.na.leagueoflegends.com...highlight=kawl 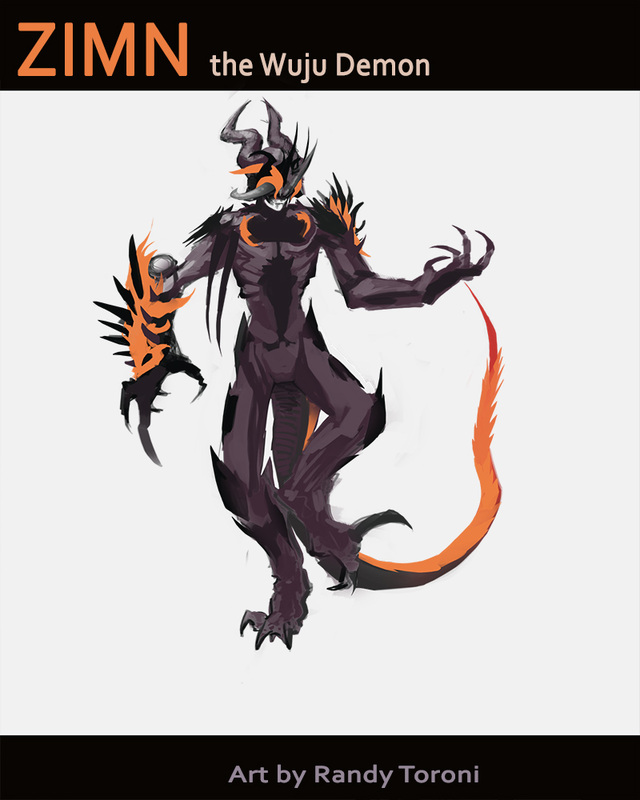 Description:
Name Zimn
Title The Wuju Demon
Role(Fighter/Assassin),
Race formerly Human Demon
Gender male
Age early 20's
Height 5' 10",
Weight 100 - 150 lbs
Hair bald
Backstory: Among the many different styles of martial arts in Ionia, all have their secrets; techniques so destructive, they were hidden away from the eyes of the world. Even thy mystical school of Wuju was no exception. The inhuman being known as Zimn is the living example of this fact. Wielding a corrupted style of Wuju, he decimates his enemies through sheer speed and strength alone, making him an incredibly deadly opponent.
Costume: Pants ionian mixed with noxus design
Props: Holding his former Wuju helmets
Personality: borderline sociopathic, cunning, calculating